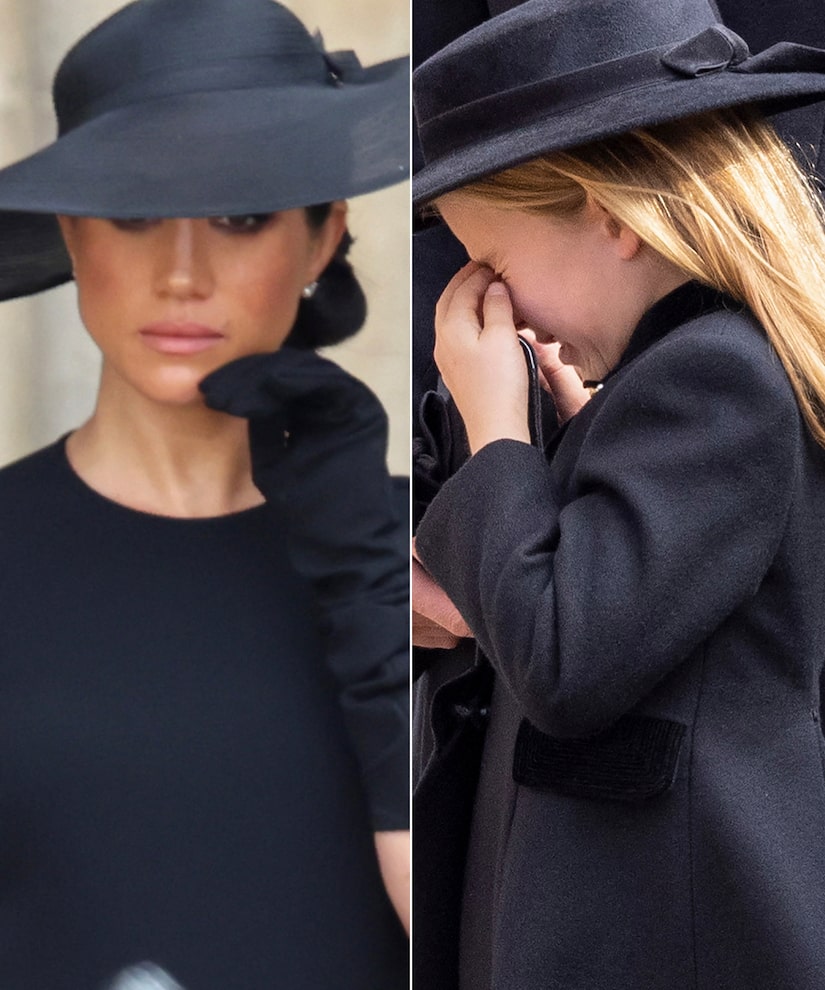 It was an emotional day for the royals as they said a final goodbye to Queen Elizabeth II.

Among those to cry at the Queen’s funeral was Prince Harry’s wife Meghan Markle, who was photographed wiping away a tear outside Westminster Abbey. The Queen’s great-granddaughter Princess Charlotte, 7, also looked visibly upset while standing outside the Abbey with her mother Kate Middleton, Queen Consort Camilla, Prince George and Meghan. 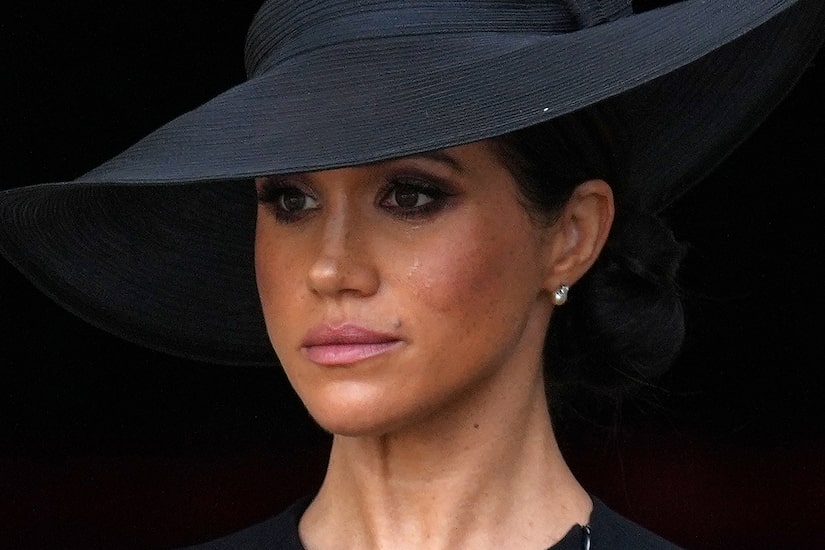 At one point during the funeral services, Meghan and Charlotte shared a brief but sweet aunt-niece moment when Charlotte turned around in Meghan’s direction as they stood in a group with the royals mentioned above. When Meghan noticed, she smiled as Charlotte turned back around. 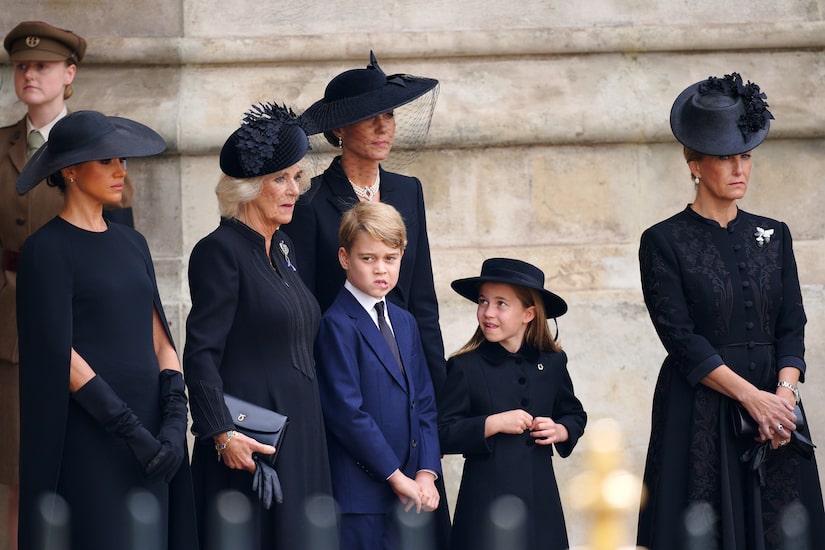 Charlotte also paid tribute to the Queen with a special horseshoe brooch. The jewelry was a gift from the Queen to Charlotte and was worn in honor of her great-grandmother’s love of horses.

This was the first time Charlotte has worn a brooch or a hat. 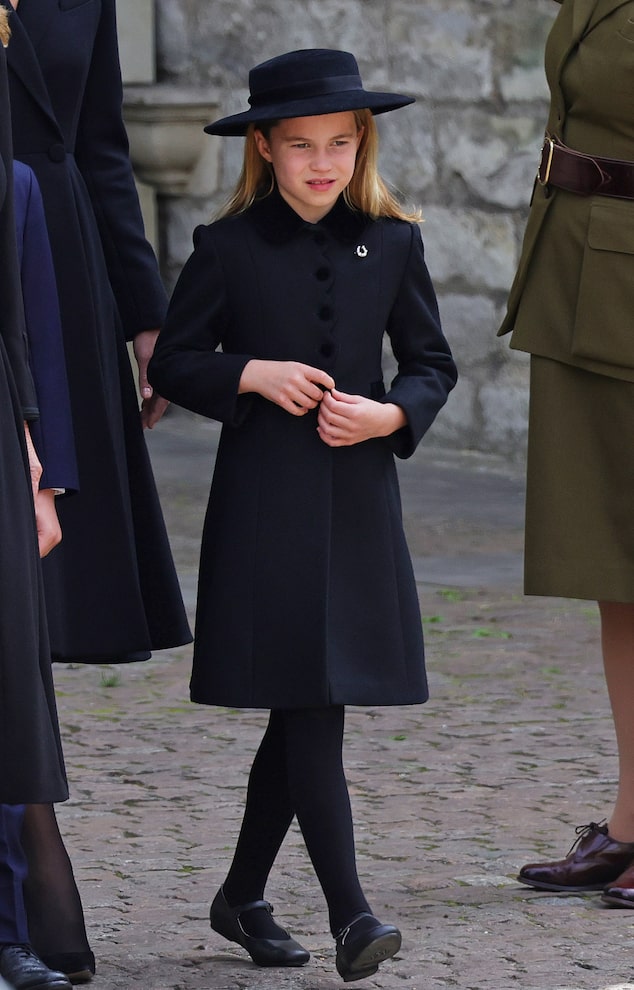 In doing so, she was very much aligned with the other royal women.

The earrings were an accessory to her somber black cape dress by Stella McCartney, which the former actress further accessorized with a large black hat and pointed shoes. Meghan did not wear a veil like Camilla and Kate. 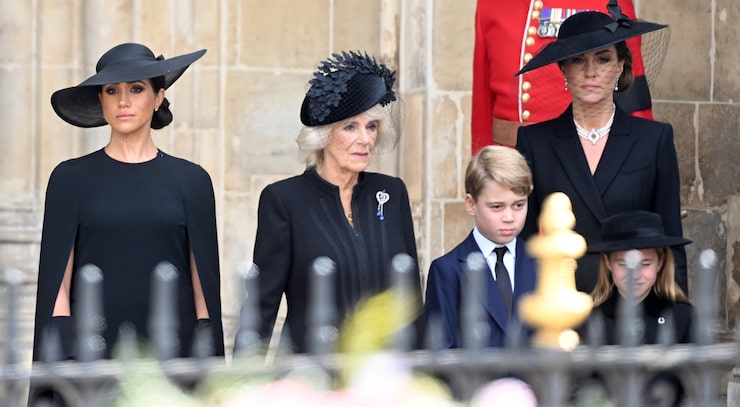 Meanwhile, Kate attended the service in a double-breasted coat dress and a black hat with netting. Paying homage to the Queen, Middleton included Bahrain Pearl Drop Earrings and a Japanese pearl choker necklace. The four-tiered pearl chain with a large stone in the middle was reportedly one of the Queen’s favorites.

For her part, Camilla wore an ankle-length coat dress, black hat with veil and the Hesse Diamond Jubilee Brooch. The stunning piece features diamonds and sapphires and was a gift to Queen Victoria from her grandchildren. It includes a heart and the number 60 in Slavonic numerals.

British Vogue’s jewelry and watch director Rachel Garrahan, explained, “The Queen was famous for speaking through her brooches and now the Queen Consort takes on that mantle. Breaking with royal mourning tradition of wearing only diamonds and pearls, she made a very personal tribute to the Queen. The Hesse Diamond Jubilee Brooch was unseen for more than a century when Camilla started wearing it and is believed to have been passed down from the Queen Mother, whose jewelry she wears regularly. It is one of Camilla’s oldest pieces and its royal story links to her past and the monarchy’s future.”